WristQue is a personal sensor wristband for smart infrastructure and control.
Most of the infrastructure around us is now networked and computer controlled. This allows for many more degrees of freedom than ever before, but it’s often hard to make use of that freedom. For example, a light switch in a modern building might look something like this: 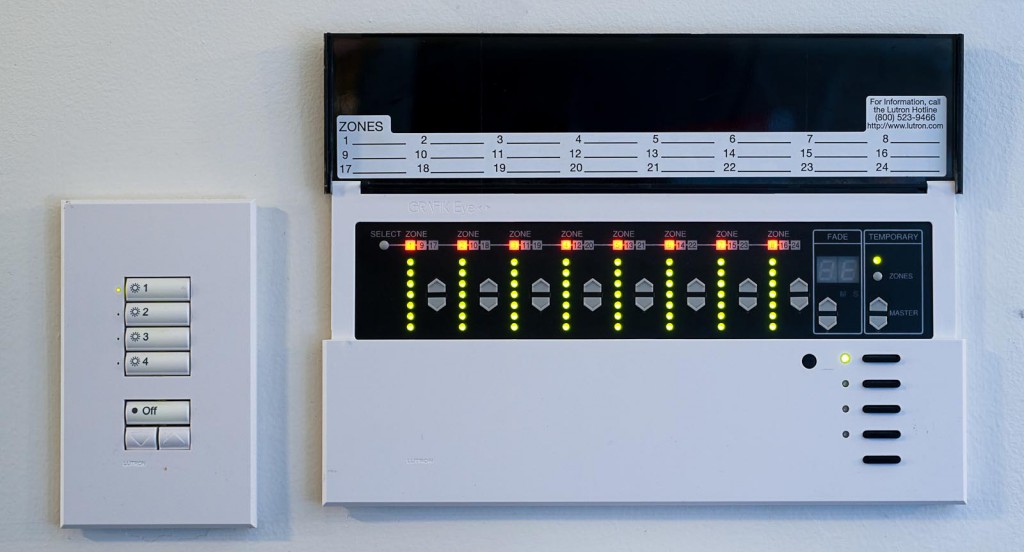 This panel affords a lot of control—this one provides access to 24 individual lighting zones and five presets. But if none of the presets produce the desired effect, then the user has to individually adjust each of the 24 zones, which are identified only by number. Furthermore, a panel like this is often located on the wall in the corner of a very large space. Often, it is not even possible to see the lights one is adjusting because they are too far away or obscured by walls.
This is a common theme in home and building automation. There are many more degrees of freedom, but the controls haven’t gotten any better. Sensors can help automate parts of the control of infrastructure systems, but in practice, sensors installed in buildings don’t go beyond simple motion detectors to turn off the lights, or the same thermostats that have been around for decades. 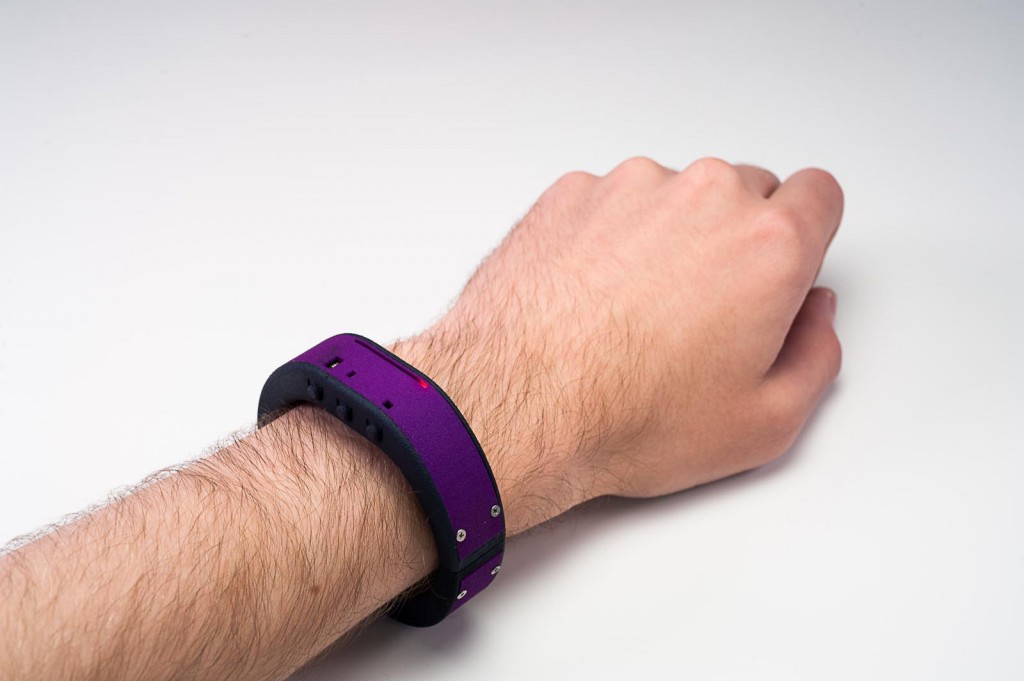 WristQue takes advantage of low-cost miniature sensors and precise indoor location to become a personal controller for home and building infrastructure. WristQue provides the wearer with personalized automatic control, and a way to take control that’s as simple and intuitive as pointing and gesturing.
By tracking both the wearer’s location and the orientation of his or her wrist, the WristQue system can determine which controllable object the user is pointing toward.  This lets the user select devices to control (such as a bank of lights on the ceiling) by simply pointing at them.  Once a device is selected, the user can control it by gesturing (such as rotating the wrist to control brightness.) 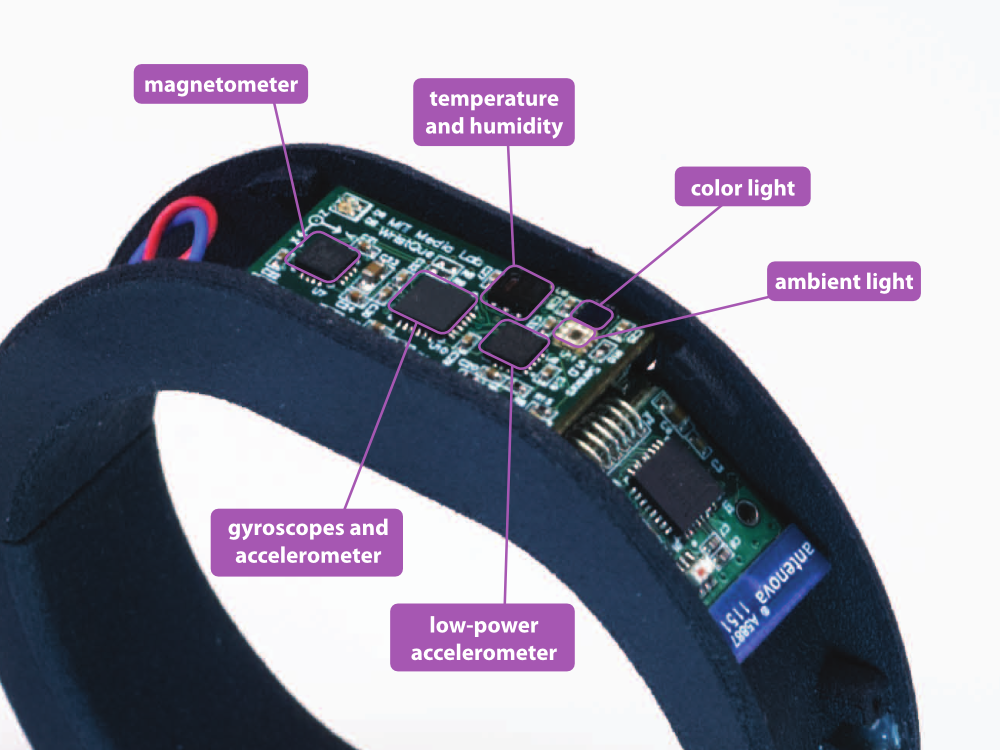 The WristQue is loaded with sensors.  A 9-DoF inertial measurement unit (consisting of an accelerometer, gyroscope, and compass) allow the orientation of the wearer’s wrist to be precisely measured to enable pointing.  A low-power accelerometer allows the wearer’s activity level to be monitored.  Color and monochrome light sensors measure the lighting conditions in the wearer’s environment—the color sensor measures the quality of the light, and the monochrome sensor is fast enough to sense patterns invisibly modulated into the light, which contain information such as which fixtures the measured light is coming from.  The temperature and humidity sensor enables personalized comfort control, putting a thermostat on the wrist of every occupant in the building. 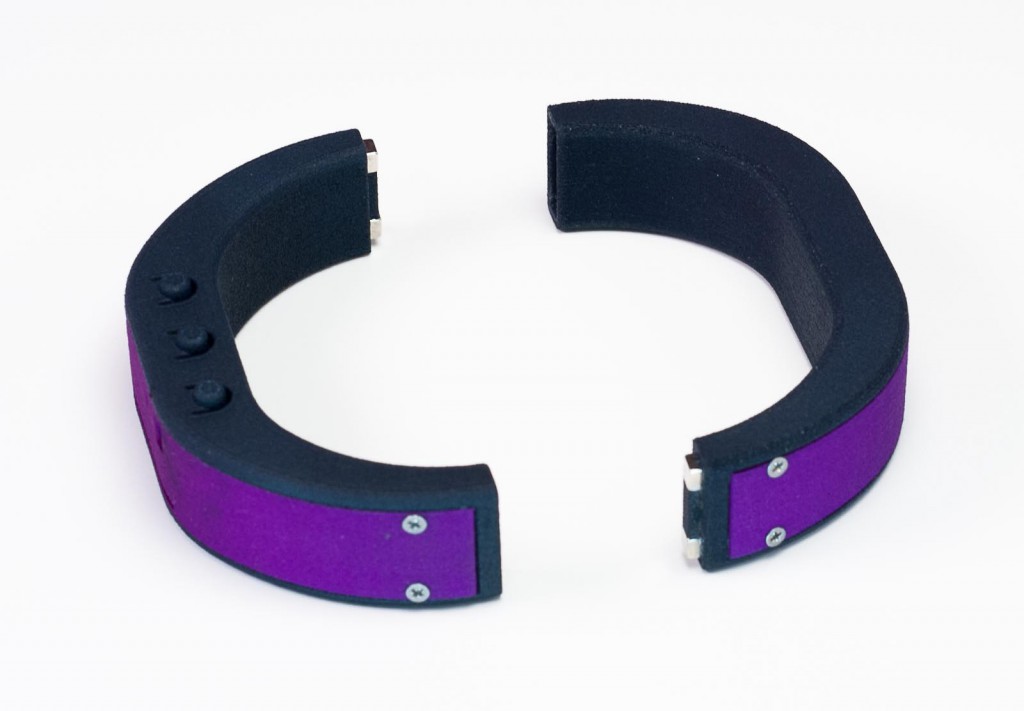 The enclosure for the WristQue is 3D-printed from a parametric model that is customized to the individual wearer.  The two halves of the band snap together with magnets.  The top half of the band contains the electronics, while the bottom half contains the battery (which snaps onto a charging base when removed.)